One of the great appeals of travelling in Europe with a Eurail pass is being able to visit so many countries in a short space of time. This is a particular novelty for North American and Australian visitors, where it takes days of non-stop ground travel to cross their respective countries.

Many people travel with a Eurail pass specifically to visit as many countries as possible. With a Eurail Global Pass it is possible to visit up to 24 countries.

Having said that the railways don’t go to every country. When I say country I’m talking about the microstates. If you want to visit these microstates while using a Eurail pass here is how to get to each one.

While Monaco doesn’t show up on the Eurail list of countries it’s included as part of France. There is one station in Monaco; Gare de Monaco – Monte-Carlo. The station is served by the local TER Provence-Alpes-Côte-d’Azur services between Marseille-Saint-Charles and Ventimiglia. The station is in between Cap-d’Ail and Roquebrune-Cap-Martin, but the most convenient way to get there would be to get the train to Nice.

There are no train lines in Andorra so the best option is to get a bus from neighbouring Spain. To get to Andorra La Vella (the capital of Andorra) you can get the train to La Seu d’Urgell in Spain and then get a bus from there. The bus company is ALSA and the trip is about 30 minutes.

Similar to Monaco, Liechtenstein has a train link that passes though it that is operated by another country. Unlike Monaco, the train service is not very frequent.

ÖBB, the Austrian railway, runs a service between Feldkirch in Austria, via Schaan-Vaduz station (near Schaan) and Buchs SG station in Switzerland. Trains only run a few times a day so if you are limited for time it might make more sense to get the bus.

To get a bus to Vaduz via the nearest train station the options are to get to Sargans, Switzerland and then catch a bus from there, or from Feldkirch in Austria. There are buses that run from each train station direct to Vaduz, so there are no complicated journeys across the city to make this trip.

San Marino is a microstate entirely surrounded by Italy. There are no train lines in San Marino so your best option is to get the train to Rimini and catch the bus from there. The bus departs hourly from just outside the train station to the City of San Marino.

The Vatican City is the smallest of the microstates and the easiest to get to of the list. To get here you just need to get to Rome which is where the city-state is located. While there is no train service to this tiny state there is actually a train line that runs to the Vatican and a train station as well. The line connects to Saint Peter’s station in Rome and these days it is only used for freight. 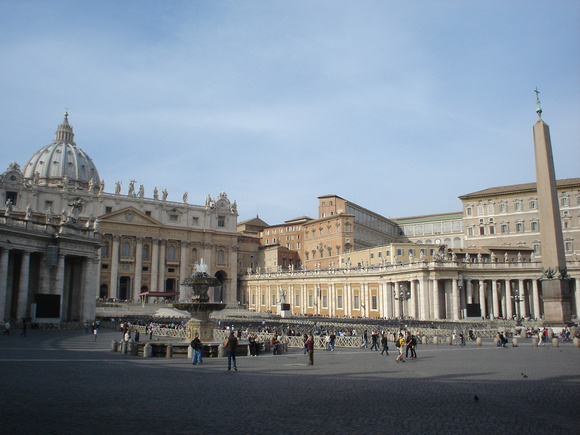